Recently during lunch with a co-worker, Mighty* – we’ve bonded in our search for sanity in the crazytown that is our work environment – she exclaimed, “Keisha, I have to tell you! Something you told me really helped me!”

A few weeks earlier, on our way back from lunch, dodging poo on the sidewalk (dog? human? who knows), sidestepping a disheveled-looking man angrily muttering to himself and quickly breezing past a urine-scented staircase, – in other words, a not atypical walk in certain parts of San Francisco – Mighty told me how she’d fallen victim to a scam on a popular website – a website which began as a consumer-to-consumer auction site, we’ll call it, “eCray”.

She sold an expensive electronic item to someone who conned her out of four figures. Distraught and poorer, she complained to eCray’s customer service who told her due to some loophole, “Sorry for ya, but you screwed yourself. Sucks for you though, we get that. Maybe call a lawyer? Ok, bye! Please shop again!” 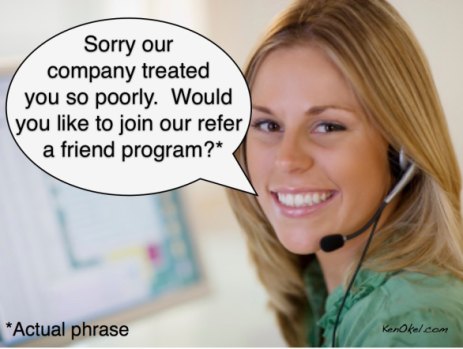 Clearly exasperated and frustrated, she concluded, “I guess I’m just out all of that money! It was stupid! I can’t believe they won’t do anything!”

I recounted to her the tale of my great battle against the big online bookstore that put many baby bookstores out of business. But, I didn’t buy a book from them, I bought something else, because they sell other stuff too, everything actually, it’s pretty amazing. Let’s call that company, “Jungle.”

Due to a botched transaction with a reseller (they have stuff for resale too!), I was owed a refund which I never received. At the time, Jungle’s customer service that was so bad and it angered me so much I wondered if I needed therapy, after all, it wasn’t all that much money. But, THEY messed up and THEY needed to give me back my money. It’s the principle of the thing. So, when Jungle’s customer service hit me with:

“We are sorry for your inconvenience, but our policy states that we must be money-hoarding automatons with fake names – because you know and I know my name isn’t really ‘Brad’ or ‘George’ or ‘Angelina’, but something less easy for the average American to pronounce – and we can’t give you a refund. But, sorry, that sucks ma’am. Ok, bye! Please shop again!”

Screw that. I drafted a letter and an email – old school and new school – to “whom it may concern”, about the small amount I was owed, why it was owed to me and the amount of ridiculous shenanigans and fuckery that ensued when I tried to reclaim my money thanks to their blood-pressure raising, script-reading, customer service. In summary, I added how I’m not going to be shopping there anymore because they’ve left a bad taste in my mouth and I will never be the same. Ever.

Letter stamped, dropped in the mail and email sent to the VP of Customer Service, the VP of Marketing and the VP of VPness. That should about reach at least one person high enough who will care that a customer is so upset she’ll take her fight up the ladder and tell the whole damn neighborhood about it.

A few weeks later, I received a lovely email from a VP expressing intense regret at the unfortunate experiences I’d endured at Jungle’s hands along with a refund for the full amount owed and a gift card to buy anything I like (you can buy Q-tips! Q-tips delivered to your doorstep in two days!).

When I finished the story about my battle against the giant Jungle, Mighty let out a big breath: “Wow, I didn’t think of that. You’re right; I should do that, because I am so angry! That is so wrong, they should be protecting their customers!”

At lunch, she recalled the telling of that anecdote and being marveled by my perseverance. I offered as explanation:

“I guess I just never take ‘no’ for an answer. I never really thought about it, but I think I just figure there’s always a way around most things. There’s almost always someone higher up who can get you what you need or another solution around a roadblock.

I just keep trying until I decide either it’s no longer worth it or I’ve exhausted my solutions. I ask myself, ‘What’s the worst that could happen?’ and decide if it’s worth it.”

Ready for another story within a story?

I shared with her how Last Christmas, back in Texas to visit the family, I went to the movies with my mom and younger sister to see the film Mandela. Unfortunately, an older version of Martha and the Vandellas were there too, gossiping like church ladies. Now this is Man.de.la, a movie about a man of great historical importance, who, along with his fellow South African supporters, suffered through much violence and debasement as demonstrated in evocative scenes. Imagine having your stream of emotions interrupted by obnoxious braying:

My mom and sister periodically turned around presumably to mean-mug them. A few other patrons in the mostly empty theatre attempted to shush them, but they’d start right back up again, clucking away like plump hens freed from their pen.

Ordinarily, this is exactly the kind of shit that sticks in my craw. I have paid damn near the price of a concert ticket to sit in this dark theatre with strangers and my family, eating overpriced artery-clogging popcorn because the stuff is addictive, and these women here, these women here, are bleating their way through Mandela. Mandela!

However, I was more fascinated with my mom and sister and their fascination with Rude, Ruder & Rudest.

My sister huffed. Then she stood up. She is 22 and has more confidence and self-assuredness at her age than I had my entire high school experience. She whispered, “I’m going to find the manager.”

A long 10 minutes later, my sister returned, shortly followed by a young usher, who looked like he’s capable of nothing more than wrestling a stuffed tiger, peered toward the back of the theatre where the three assmigas have caught on and were silently behaving themselves.

He stood in place for a beat, probably sizing up the women, shrugged – I’m sure he realized they could take him and the stuffed tiger he wrestled – and he exited the theatre without a word to them.

We were not impressed.

For a blissful half an hour, the women remained largely silent, shuffling and shifting weight periodically, almost as though the pain of holding back their witty commentary might eat them up from inside, until finally bits of conversation, varying in volume from a whisper to audible travel-level and worked its way toward us:

Gah!. We did our best to ignore their voices as they chittered intermittently during the movie.

After the film, my mom approached the useless usher and requested to speak to the manager.

“Yes, ma’am!” He immediately turned and headed for a private door.

I think he would have flown to the manager to get there faster if he could. My mom’s tone indicated, “I mean business. You better get moving! Nobody’s playing here!” 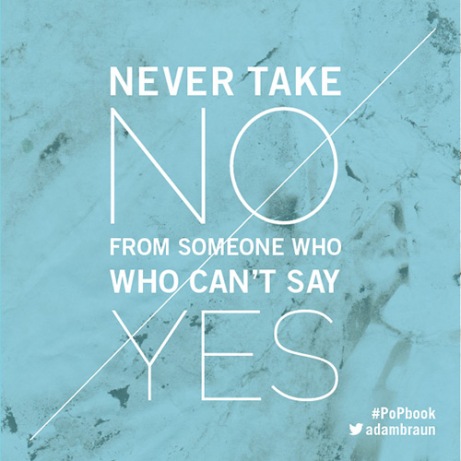 When the manager arrived, my mom and sister calmly explained to the him the pain we suffered through having our Mandela experience ruined: Do you know how much movie tickets are these days? And my sister/daughter is in town all the way from California! and this is what she has to go through? I just find this unacceptable. We did not enjoy ourselves.

I stood silently in awe trying to avoid breaking out in a full smile of pride.

In less than five minutes, we emerged from the theatre having received an apology and 8 passes to see any movie we like.

“I wrote to the Vice President of Customer Service at eCray like you suggested,” Mighty said, “and I got it resolved! It was so fast! They refunded all my money! I have to remember this! Thank you for your help!”

Sometimes it pays not to take no for an answer.

* Name changed for the sake of making my life easier

By The Girl Next Door is Black
5 Comments