A couple of weeks ago, seated with a girlfriend outside Philz Coffee, a random, late middle-age man passing by, grabbed my foot and shook it. He didn’t say anything, just shook my foot and continued walking.

My friend and I looked at each other, puzzled. I didn’t say much and publicly shrugged it off. It happened so fast I didn’t even have time to react. Afterward, however, I sat feeling disturbed, my attention divided between my discombobulated thoughts and my friend’s excited chatter about her upcoming travel plans. What made that man think he had the right to reach out and touch me? Would he return? With the steady stream of pedestrians, many toting along canine companions larger than me, I uncomfortably wondered if anyone else might feel compelled to invade my personal space and grab a limb.

A few weeks ago, I opted for an Uber home after dinner with a friend. A few blocks away from my apartment building, I instructed the driver where to drop me off. He nodded, but a few seconds later looked behind him and said, “Uhhhh, there’s a police car behind me. I’m going to drive for a little while, see if he goes away.”

My heartbeat sped up ready to race. Danger! Danger! Why does he care if a cop is behind him? They exist, they patrol, they eat donuts and tacos. If you haven’t done anything wrong, you probably have nothing to worry about (in that neighborhood, with his skin color). The story I’d heard of the woman in West Hollywood who was allegedly kidnapped by her Uber driver in the forefront of my memory.

I prepared to weaponize. I will stab an attempted kidnapping motherfucker in the eye. I looked around and assessed my surroundings, people to ask for help if needed,or a place to run. Only 9pm, but my neighborhood is a quieter one and thus few people wander around late – it’s one of the reasons I chose it, fewer chances of being harassed on the street. The doors to the car were locked. This man is not taking me anywhere. My phone poised to dial 911, I requested, my tone firm, “Please let me out right here.” He drove one more block, my anxiousness increasing with each wheel revolution until finally he stopped the car, I got out and told him, “Never say ‘no’ when a female passenger tells you she wants out.” I don’t know what his issues were or his intentions, but the experience left me shaken. Did I do everything I could have to prevent a bad situation?

After, I read up on the incidences of assault and kidnapping on female passengers in taxis and shared ride services. One male officer suggested that women consider riding with a friend. I grew angry. Isn’t the point of taxis and other passenger services to provide convenience to get from point A to B? I have to adjust my behavior, put a crimp in my lifestyle, because there are some people, men – let’s be real – who think they have a right to my body. Though, I didn’t share this story – as much as it disturbed me – with anyone else because I feared the potential judgement of questions, “Were you drunk? How were you dressed? Were your clear with him that you wanted to get out? Did you flirt with him? Why were you out so late?” All the ways in which female victims are sometimes blamed for the poor behavior of their transgressors.

A few of months before the Uber incident, on my way home from a friend’s place after the sun disappeared for the day, as I boarded the bus, the bus driver, with his shaggy muted brown hair, 70’s pornstache, and Dahmer-style eyeglasses, greeted me with an approving glance and asked creepily, What’s a nice girl like you doing out here this time of night?” Is 7pm when all the “girls” are to pack it in for the day and stay indoors? I’ll admit, I stereotyped him, his appearance and borderline-lascivious gaze brought to mind the type of man police discover harboring missing young women for years.

A handful of other passengers were aboard, including two women – one young, one middle-aged. I decided to board, we’re all women riding the bus at night and there is strength in numbers. I texted my girlfriend to fill her in on the situation and updated my Facebook, a humor-tinged status referencing the fact that bus drivers here are sometimes as stoic as the men guarding The Royal Palace, and this guy was different. Should anything actually happen, people will know I’m missing sooner than later. Thankfully, I disembarked the bus without incident.

Last year, on our way to a piercing shop in The Haight, my sister N and I were leered at by street kids lazing on the sidewalk, leaning against a clothing store, looking lost, stoned and sketchy. One “kid” (he appeared to be in his early twenties), white with dirty, stringy blonde hair, shouted at us, “Hey ladies! I’ll lick your p–sy for $10.”

I shook my head, the taste of revulsion and disgust filling my mouth. I’ve experienced my share of insensitive and objectifying cat-calling, but this incident begged to stand out. We are more than our vaginas and ours breasts, we are human beings that deserve the respect we afforded them.

During dinner in The Mission with two of my ex-coworkers, Andrew and Melissa* – the same week as the foot-grabbing episode – Andy, one of the most genuine, big-hearted people you could ever meet, asked us earnestly for our thoughts about the national ongoing rape culture discussion. He didn’t want to unknowingly perpetuate the behaviors and beliefs that encapsulate it. We assured him he’s one of the last men who should be concerned with promoting rape culture. As things tend to go, the men who should concern themselves are likely the ones not thinking about it. Similar to how, often the people most insistent on not talking about race, are the ones who need to examine their beliefs and behaviors. 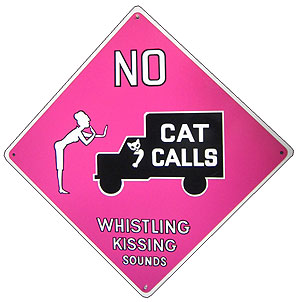 After dinner, our trio headed to the BART station; Andy insisted on walking us to the BART and bus stops, because that’s the kind of guy he is. We ambled down Valencia Street, savoring our time now that we no longer all work together, when a lone man of average height, approaching from the opposite direction, eyes ogling me and Melissa, uttered, with his voice hinting at desire, “Sexxxxxy.”

I ignored him. No man worth my time will approach me on the street and call out to me like I’m a cow in the field.

Andy gaped at us in disbelief. “Did you guys just hear that?!” he asked.

I looked at Melissa, she nodded with indifference. I shrugged and told Andy, “This happens all the time. You get used to it.” He shook his head in sadness. I told Andy, “I’m glad you are with us though. Men respect other men. He won’t be bothering us.” Had Andy not been with us, who knows what would have happened? The three of us remained silent for some time, my words, “You get used it,” reverberating in my head. I have gotten used to and I hate it. I hate that I have accepted that this is part of life as a woman.

*Not their real names